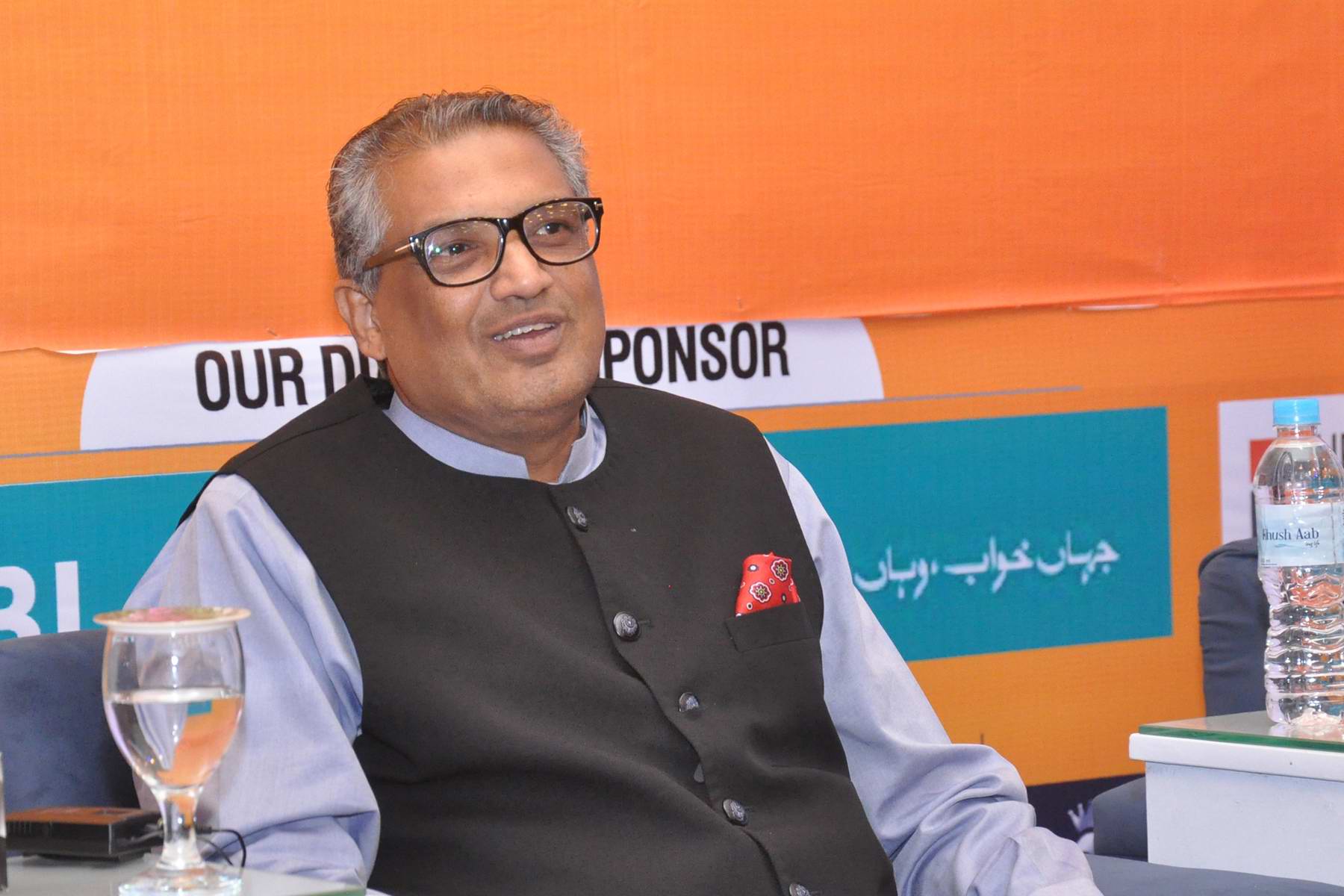 A jam-packed concluding session titled 'An interaction with Sargodha Alumni: Sohail Warraich', an eminent journalist, renowned anchor and writer, captivated the audience with his causal style on the final day of Sargodha Literary Festival. Sohail Warraich shared his experiences as a student in the then Government College Sargodha (GCS) and in the field of journalism as an anchor, political analyst and a writer. He appreciated the efforts of University administration for exposing students to intellectuals and scholarly figures through Sargodha Literary Festival.
What was the biggest challenge you faced in your academic life?
During my stay at college, I had been actively involved in co-curricular activities, so, I failed to meet expectations of my parents in science subjects. I had to work hard to proof my interest in arts subjects and gain proficiency in English, I opted English literature for my master's degree from Punjab University and nailed it by securing overall second position.  I believe mental toughness and hard work for specific goals are the keys to success. With focused mind, you can achieve anything.
How do you think that the literary environment at the then GCS imparted journalistic skills which helped you in pursuing the field of journalism?
Under the able guidance of Prof Riaz Ahmad Shad, Prof Khursheed Rizvi and Prof Rafi uddin Hashmi, GCS offered wonderful literary environment. It provided me an opportunity to polish my skills of speaking and editing, which helped me throughout my professional career. I remained secretary of Majlis-e-Quaid,  Majlis-e-Iqbal,  celebrated  Saal-e- Iqbal   and   Saal-e-Quaid-e-Azam   with   great enthusiasm, and worked as an editor of 'Zia Bar', so I got my initial training of journalism form GCS.
Despite continuing your family profession of teaching, why did you opt the field of journalism?
I am a journalist first and then a lecturer, as I started practicing journalism during student life. Though, I continued teaching for 17 years and worked as a journalist side by side. But When I started working with the TV, I couldn't maintain balance between the two professions. So, I left regular teaching and continued as a visiting professor in Punjab University. I consider this field of journalism same as teaching.
With the rise of new media, how do you think that traditional media will maintain its credibility?
We are in the evolutionary phase of media. New media is at its nascent stage hence it is immature than the mainstream media. In my opinion, the sense of responsibility lies on both and their merger change the dynamics of media. Now, people are more aware and educated about the content than before. Mainstream media has to play vigilant role to maintain its credibility by showing professionalism and balanced reporting.
Storytelling is the one of the distinguished features of your columns. From where did you get the inspiration?
It is said that sense of an age is literature, and in my opinion, literature is the best part of society. I love reading contemporary literature. So, I tried to introduce this new trend into column writing which is appreciated and valued by the readers.
Do you think media as fourth pillar of the state and opinion maker?
Quaid-e-Azam considered journalism as the fourth pillar of state. He founded Dawn and many other newspapers which contributed in the Independence of Pakistan. The role of media is to inform the society, not to lead it. It's just a watchdog. The role of media is to evaluate and criticize the governments through facts.